Dianawe is the homeland of civilisation. Over the years the land has been split among numerous nations, unified under mighty empires and broken again through war and calamity. The last great empire ruled by the High Elves stretched from the desert sands, to the frozen seas. Still within the memory of elves but long now forgotten to men. 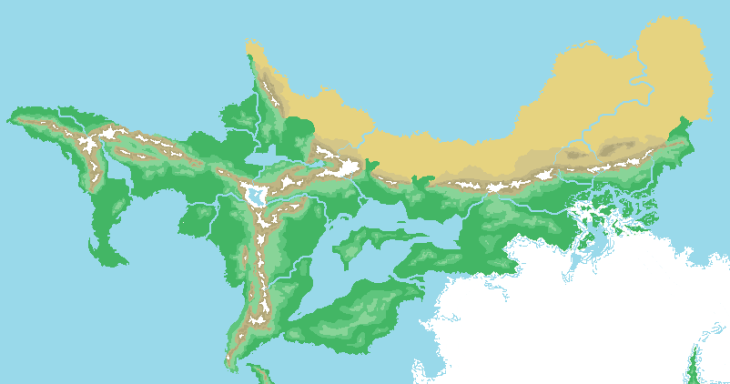 Dianawe is lush continent full of life. At its heart lies the great lake, surrounded by the lands most populous nations. The land around the lake is fertile farmland and rolling hills, with scattered forests. At the very heart of Dianawe lies the Eareste, the largest city on Lonfellin, an ancient imperial capital built by the Eareste Elves and older than recorded history.

To the eastern side of the heartland dense evergreen forests are dusted with snow, along the eastern coast icebergs make the ocean treacherous for travel. Under the ice sheets the Aquatic Elves have built large cities that cling to the underside of the ice.

To the west over the great Rechmuor Mountains that form the spine of the continent rugged highlands mountains and hills gradually slope towards coastal cliffs. To the northeast the harsh uplands gives way to a sweeping valley of deciduous forest of ancient oak.

Northward Dianawe goes from lush nature to wild lands of untamed forested valleys  to the north-west and shifting sands to the north-east. The great desert is harsh and unforgiving, shifting dunes of golden sand stretch from the base of the mountains to the northern coast. Two great rivers run through the desert, offering a vital life source for those who call the desert home.

Dianawe is home to a number races each with their own cultures, beliefs and nations.

Dianawe is at its most divided and dangerous. The great nations and traditional ways of the past have fallen. At one time all but the furthest northern and western reaches of the continent came under the wing of the Eareste Ryk ruled by the Eareste Elves the empire has stood for almost 10,000 years with only three emperors across its life times the empire was a stabilising force keeping peace across the continent and between the races. This came at a cost, humans in particular were seen as lesser citizens and their tendency to reproduce quickly was kept underwrap through a mix of coercion, brainwashing and outright force.

Almost overnight Earest Ryk lost its emperor and fell. What happened few people can tell some say divine intervention played a hand others that humans found their courage and made a stand.

New nations have arisen and are fighting for their place in the world. The Human population has exploded leading to overpopulation in the Heartlands and greater conflict and war for limited resources. In the search of a solution the nations of the heartlands have made a loose pact. They have pooled their resources to try to conquer the unconquerable land of Dorcha.