I love video games, they have the scope to do so many different things from being purely entertaining, to tugging on our heartstrings and exploring some truly interesting topics. Games are a unique playground where different realities can be explored and one of the more interesting is the concepts of religions and gods.

It’s interesting to see how humans imagine gods to be and how the real world influences these in-game religions. These are worlds in which gods exist without question and directly influence the world. Where the idea of gods have other explanations sometimes ones that are just as strange. At times they simply are mirrors of our own religions with different symbols pasted on.

Skyrim and the fantasy genre in general provides a unique opportunity to explore what it would  mean for a world where gods walk among people. Powerful gods are as much a trope of fantasy as magic and elves, possibly due to the genre’s origins in folklore and european deities. 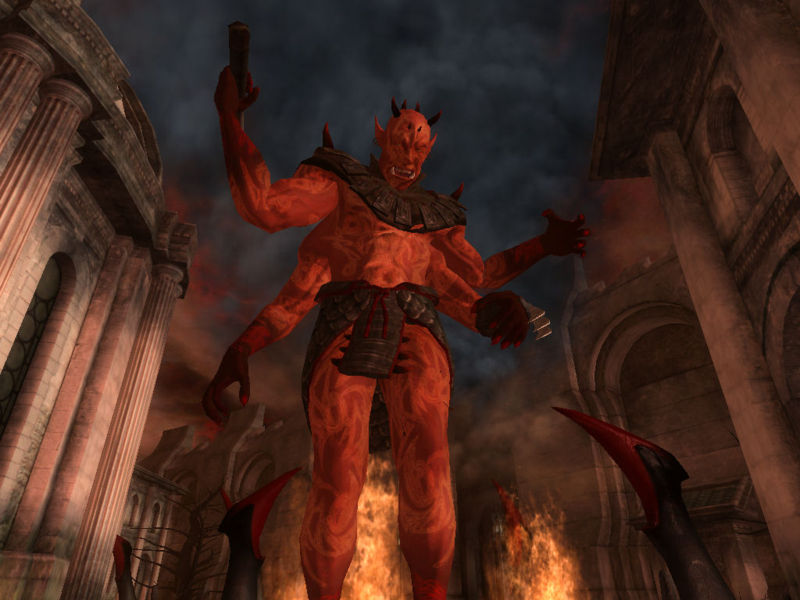 In Tamriel there are two distinct groups of gods, there are the “good” gods, the Aedra who are approved for worship. Their influence in the world is limited, they sacrificed much of their power to create the world and are worshiped as the Nine/Eight Divines (depending on who you ask). Only in times where great evil threatens the world have the Divines taken more direct action, most notably in the Oblivion Crisis of the 4th Elder Scrolls game. The other group is the Daedra, they are seen as the “Evil” gods by the Empire. They are certainly more morally ambiguous, with domain over aspects of the world such as Domination, Undead, Madness and Twilight. Some are definitely more good than others, their biggest flaw for many in Tamriel is the fact that they are ambivalent to the races of elves and men. The division between the Divines and the Daedra certainly mirror the division in the real world between faiths approved by governments to worship (the Divines) and illegal/disapproved beliefs as well as the very western idea of clear-cut divisions between good and evil.

Fallout is an interesting case, set in an alternate version of our world it has the same historical baggage, beliefs and religions that our world does. The difference being that the world has ended and in many cases the ideas of the past have been lost. The Children of Atom are the most notable faith of this new world. They believe that each atom contains within it an entire universe, and when an atom is split many universes are created. The Great War that destroyed the world is not seen as destructive, the Church believes it was a creative and holy event. In short they are an interesting group, and certainly one that seems to mirror human’s tendency to worship and seek explanations for what we don’t understand.

In Dimond City, there sits a small single floor building tucked in a corner, the unassuming building is one I’ve entered quite by accident. It is the All Faiths Chapel, a building with a handful of people and two pews and Pastor Clements. The chapel is a place for “people of all faiths” the place follows now set faith but believes in equality for all people and ways of worship. It feels like the only place of sanctuary in the wasteland. Fallout is famous for charting the collapse and breakdown of society and perhaps with this breakdown the differences between religions also brokedown and become less important.

Detroit Become Human is another great example, AR9 is the fabled first android to gain freewill. It is unclear throughout the game how true the ledgend of AR9 is, the concept is one that some andriods cling to. AR9 offers hope to the enslaved androids and reflects human nature to revert to faith in times of hardship and the nature of religions to offer hope and answers.

In all games provide an interesting playground for us to explore the ideas of gods. Sometimes they are tools used for plot, to explore concepts and different parts of the human psyche and our own history and sometimes they are all-powerful and influential beings or representations of human desire and fear. They are reminders to the player that they aren’t necessarily the most powerful players in the game’s world. There is no true conclusion  to draw from it really but it is interesting to explore and reflect on.