As challenged dragon, shouted “gaan then” an twatted him! Lang battle it wuz can wait t gar yam, as in bad way!

Kind of sounds like gibberish right? Well it’s Cumbrian, my local dialect (though in its broadest form which thankfully no one I’ve heard really uses!) roughly translated it reads:

I challenged a dragon, shouted “bring it on” and punched him! We then had a long battle and now I cannot wait to go home as I am quite injured!

Ah, accents and dialects. The sound, grammar and ways of speaking that identify where someone is from. They give a window into people’s background  and shape our first impressions of them, often involuntarily. In the real world they are an unavoidable part of who we are and something we can’t change (without great effort anyways). 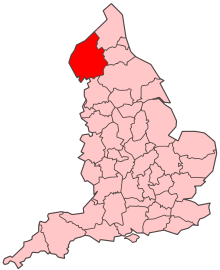 For instance I have a Cumbrian accent meaning I speak like someone from this tiny area of the UK highlighted on the map. My accent broadly speaking isn’t too broad, I occasionally interchange one for the Cumbrian word “yan” I say “garn” for going drop every “t” in a word and say “owt” instead of anything. Sometimes it’s subconscious and other times its just because I like the accent and find it fun to switch things up. However, in gaming I don’t think you ever get to see these more regional accents.

Recently I’ve finished Vampyr, it’s a pretty fun game based in Edwardian London. And as with every UK based video game you had your extremely posh speakers who could give the Queen a run for her money and the Cockney locals who I can only guess are the children of Dick Van Dyke.

The true variety of British accents are not given much of a look in, in video games. From my limited knowledge I presume the same is true of American accents.

It’s a shame because accents have some amazing benefits they can offer developers:

I would not deny that they come with their own challenges too though:

I think a more colourful choice of accents in games would be amazing, games could challenge stereotypes around accents and give wider representation of the crazy variety that exists in our world.

Though it wouldn’t be easy, accents are challenging to  write and translate. A prime example is from Harry Potter (ok not a game but it’s the best example I found!) Hagrid has a traditionally west country UK accent but in other languages his accent is dropped all together or replaced for an accent from their home nation. In changing Hagrid’s speech part of what J.K Rowling’s vision of the character you could argue is sacrificed but without this her work would not reach as many people as it could.

Accents and regional dialects mean more work for developers and are limited by the pool of voice actors out there. However, personally I  believe that with some effort, every Brit won’t sound like the Queen or Oliver Twist and every Scot like Braveheart. I for one would love a Cumbrian Dragonborn or a Gordie Lone Survivor! What accent would you love to see represented more in gaming?